A neighbour's aggressive note about a barking dog has divided the internet, but was their response completely warranted?

An aggressive note from a “fed up” neighbour has gone viral as people argue the right and wrong way to alert others about a barking dog.

The note was posted on Reddit, which has since gone viral due to the nature of the note.

“Next time you leave your dog locked in a room while you’re gone, we’re calling animal control,” the note said. 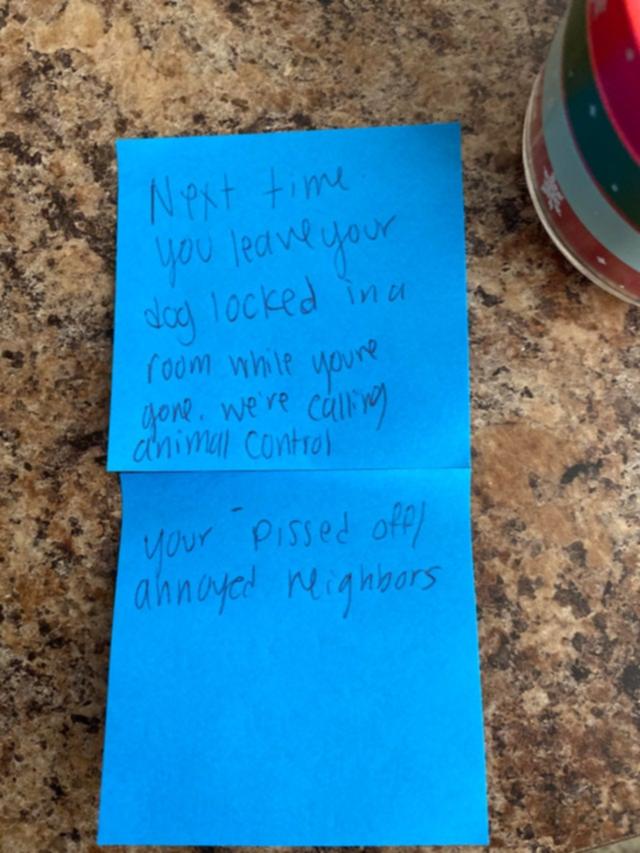 The dog owners wanted the note leaver to come forward.
“If you live in Stone Oak and left this note on our (door) let’s talk this out like adults,” the dog owner’s Reddit post said.

“We went to the vet for our other dog and were gone for 2 hours.

“I’d love to explain since clearly it bothers you to hear noise at 2 pm on a Saturday afternoon.”

Commenters were divided, as many had been in the note leavers shoes before.

“This is def an overreaction from the note person but I will also say no one wants to listen to your dog lose its s*** For 2 hours. So maybe you’re also culpable,” another added.

“It’s incredibly inconsiderate to subject your neighbours to noise like that for 2 damn hours,” one agreed.

Others fought back, saying two hours wasn’t that long.

“What do you want them to do when they aren’t home? They can’t control the dog. My dog barked when we first moved into our apartment,” one person said.

“Dogs bark and as long as they’re safe, with water, animal control isn’t going to do anything about it. Also 2 hours is nothing, 12 hours you have a big problem,” another replied.

At the time of writing, the note leaver has not come forward.